My father grew up in Alaska, having moved there with his family around the age of two. He lived first in Fairbanks, and then moved (with his parents and older sister) to a cabin a few miles outside of Fox, Alaska, which is maybe not quite a half hour outside of Fairbanks proper.

I first visited Alaska when I was nine months old. It’s the only time I’ve been there that I don’t remember, but I’m told I played on the beach and enjoyed riding in the backpack as my parents went down to the river and camped. The pictures of me in denim overalls and a pink lace mob cap assiduously putting rocks in my mouth seem to bear this out.

I’ve been to Alaska eight times in my 34 years, mostly as a kid. Other than the time when I was a baby, we went when I was three, seven, eleven, fourteen, eighteen, and twenty-five, and then this most recent trip. Each time I’ve stayed for close to or slightly over a week, which means I’m probably over two months total time in Alaska. Another couple trips, and I’ll have the equivalent of a study abroad semester.

The relation we have to the places our parents grew up (if that place is not also where we grew up) can vary greatly. For the children of immigrants, their parents’ homeland can color their entire worldview, provide a huge portion of their cultural heritage, and affect the way others relate to them. For others, if their parents grew up and promptly left where they were from, and did not maintain many familial or emotional ties, it can just be a sort of blank space, or a dead end.

I think I fell somewhere in the middle on this one- while Alaska is, of course, part of the US, it’s one of the furthest and most inaccessible parts of the US, and one which many people regard with a level of exoticism. Growing up where I did in the rural southern Midwest, most people’s parents had grown up within an at-most hundred mile radius of our town, just like my mom had. Everyone knew everyone, or at least everyone’s town and background, often whole families had been in school together for generations. At most, you’d get a student who moved in from another Midwestern state every couple of years. But Alaska! That was different.

My dad left Alaska basically as soon as he could, for all of the usual reasons that teenagers do plus a few more, and went straight to Michigan, then on to live in Arizona and Illinois before ultimately settling in Utah. The call of the Midwest was in his blood, I suppose: my grandparents were from Wisconsin and Minnesota respectively, thus presumably predisposing him to gravitate to the woodsy homeland of the generation before, just as their forebears had looked at the northern forests of America and said “Dette ser ut som hjemme“. (I can’t speak to his attraction to deserts, though I’ve inherited it; certainly no ancestor in recorded memory has lived in one.)

I grew up on his stories: Lonesome, the sled dog puppy he raised. The utter cold and dark of the winter. The sounds of moose snuffling around the windows, the rains in spring and summer, the mosquitoes, the rivers, the mountains, the midnight sun. And because I visited frequently from an early age, I could imagine it well. I knew what it felt like to bounce your way across tundra, to catch fish in breathtakingly cold water, to smell the hot springs and reek of sulfur. It was both a fantasy and a reality, something I’d known just enough to miss, but not enough to tire of. 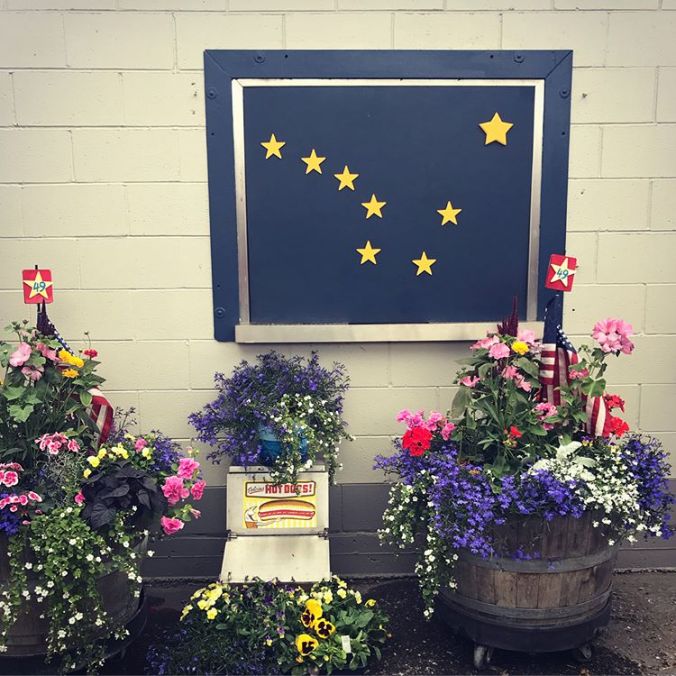 In spite of Alaska being a pretty big part of my internal landscape, I’d never been able to take my partner with me to see it. It was funny to think about; we’ve been together nearly seventeen years, and so it was a strange last holdout of a thing he didn’t have immediate knowledge of, but which was important to me and to my self-understanding. Fortunately, this trip we were both able to go, and we were able to make a good long trip of it, too, and get some time to do things together, as well as with family.

Alaska is amazing. It feels “young” in a way that most of the rest of the US doesn’t, because of the newness of most of the infrastructure (there’s not much that’s older than a hundred years in terms of white people settlement) and the fact that a good proportion of the adults there can remember the advent of statehood. (This “newness”is, of course, misleading- it’s one of the longest-settled bits of the continent, and the First Nations in Alaska have been living happily there for literal millennia.)

The emptiness of it appeals to me. I’ve never liked living in a city, and living in the Bay Area for twelve years wears on me. I hate the sprawl, and the beauty of the mountains and the millions upon millions of trees makes me feel open and energized again. I love the midnight sun, and the weird little geological formations, and the northern lights, and the vastness of the sky.

Footnote: much of the Anchorage portion of this trip was suggested by the wonderful @mariancall, as I had not spent much time there previously – many thanks for the excellent suggestions!